This series, launched in 2001, revived the earlier Verification Matters series (1990-1997) and replaced its successor, the VERTIC Research Reports (1998-1999). They are substantive ad hoc research reports on a variety of verification topics, written by VERTIC researchers or external authors. To order a print copy of Matters, please contact vertic@vertic.org. 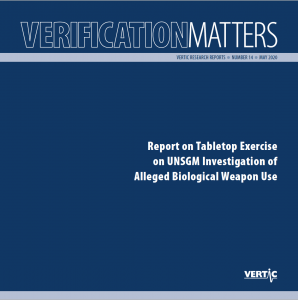 Means to Reinforce Research on Nuclear Disarmament Verification: report on a series of regional conversations

The achievement and maintenance of a world free of nuclear weapons remain stated policy objectives of many governments. Years of bilateral and plurilateral research initiatives have however not yielded a formal process whereby results can be internationally shared, leading to an initial set of verification arrangements that may prove politically acceptable. This report is based on a series of four consultative workshops hosted by VERTIC throughout 2017 with stakeholders in Africa, Asia, Europe and Latin America, which aimed to explore if further measures can be taken to enhance international cooperation on nuclear disarmament verification. The consultations discussed a hypothetical proposal, namely, the establishment of a multilateral Group of Scientific Experts as a means to build on the embryonic network of international expertise on nuclear disarmament verification that currently exists through a sustainable and inclusive programme of work. 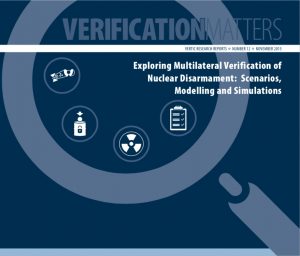 The report provides a guide for developing simulation exercises to consider the technical, legal and political challenges involved in verifying nuclear disarmament. It explains how creating nuclear disarmament ‘scenarios’ and technical models of nuclear programmes can provide detailed and holistic environments in which to run these simulations. It also discusses questions that need to be addressed while exploring disarmament verification options to ensure that any proposed solutions are reliable, coherent, trusted and accessible. 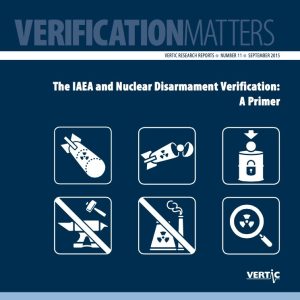 The IAEA and nuclear disarmament verification: a primer

This primer seeks to facilitate an informed debate at domestic and international levels on the challenges and opportunities of multilateral verification of disarmament through the IAEA. It aims to strengthen capacity among IAEA Member States and other stakeholders in verified nuclear disarmament by providing the reader with an introduction to the main issues associated with an IAEA role in nuclear disarmament verification. 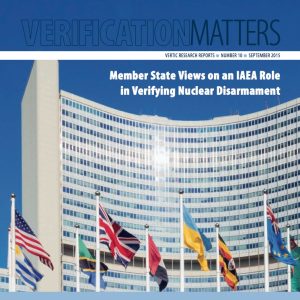 VERTIC has conducted a survey of International Atomic Energy Agency (IAEA) member states to provide a more detailed and standardised assessment of views on an agency role in disarmament verification. The survey examines views on the steps the agency should take to equip itself for this role, and the types of support mem- ber states are prepared to give towards this end. 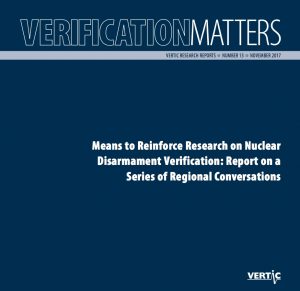 The UK-Norway Initiative was not the first effort to look into dismantlement verification; nor will it be the last. Comparing the Initiative’s strengths and limits with initiatives of the past seemed a good way to highlight its unique features, to explore which verification solutions might work in real-world scenarios, and to identify gaps in the current body of research.

Use of voluntary transparency measures to increase trust in States’ nuclear programmes: the case of Iran

This paper, together with its companion study, collectively aim to identify a range of possible verification, transparency and confidence-building mechanisms—through which trust can be re-established and further strengthened.The two papers are written from a technical and legal perspective and are intended to give an independent, impartial and dispassionate analysis of possible measures and processes to facilitate resolution of the current situation.

James Acton with Joanna Little
Matters no. 8, May 2007

This paper, together with its companion study, collectively aim to identify a range of possible verification, transparency and confidence-building mechanisms—through which trust can be re-established and further strengthened.The two papers are written from a technical and legal perspective and are intended to give an independent, impartial and dispassionate analysis of possible measures and processes to facilitate resolution of the current situation.

In December 2004 the Weapons of Mass Destruction Commission (WMDC) published the study, Enhancing BWC Implementation: A Modular Approach, which was prepared by the Verification Research, Training and Information Centre (VERTIC). In the study VERTIC identifies a range of mechanisms that could improve the implementation of the 1972 Biological Weapons Convention (BWC). This new VERTIC study updates the 2004 WMDC study and assesses the possible mandates for, and the responsibilities and requirements of, the modular mechanisms that have been identified to strengthen the biological weapons regime.

The International Atomic Energy Agency has been guardian of the nuclear non-proliferation regime since the 1950s. The organization’s mission statement reads that it ‘verifies through its inspection system that States comply with their commitments, under the Non-Proliferation Treaty and other non-proliferation agreements, to use nuclear material and facilities only for peaceful purposes’. Its central role in nuclear verification is uncontested and essential in the worthwhile effort to build trust among nations, and ultimately to realize the core objective of the organization’s own motto, to promote ‘atoms for peace’. To date, there have been few readily accessible studies on the Agency’s role in detecting the research, assembly and testing of a nuclear weapon or a nuclear explosive device once a state has acquired the necessary quantity of nuclear material.

A comparative theoretical framework of on-site inspections (OSIs) is presented. Specific regimes, together with their historical contexts, are then described, including the implementation of OSIs. The future nature and role of OSIs, as well as related technical aspects, are also considered. While some OSI regimes are broadly comparable in terms of purpose and implementation, the variety of their respective structures and specific purposes makes it difficult to draw meaningful comparisons across the various regimes. Since OSIs have generally been considered within the context of individual treaty regimes, it is hoped that the present study will provide a clearer understanding of their role in arms control and disarmament regimes generally.

It is sometimes argued that advances in the technologies and techniques that are vital for implementing and verifying nuclear arms reductions would facilitate the political decisions necessary to achieve deep cuts in nuclear weapons and, ultimately, the creation of a nuclear weapon-free world. To assess the scope for such advances being made in the near future, it is useful to survey current worldwide patterns of expenditure on verification and related research and development (R&D). The scale, geographical location, organisation and technical objectives of existing work will help suggest where opportunities lie for reform or expansion of efforts worldwide.

The Biological and Toxin Weapons Convention (BWC), which was opened for signature in 1972 and entered into force in 1975, prohibits the development, production, stockpiling and acquisition of biological and toxin weapons and reinforces the existing taboo against their use. The BWC was heralded as groundbreaking—the first international agreement to outlaw an entire class of weapon of mass destruction. But the treaty, only four pages long, lacks detail on how some of its commitments should be implemented and contains no verification measures.

On-site inspections (OSIs) are one of the principal means for verifying state party compliance with the 1993 Convention on the Prohibition of the Development, Production, Stockpiling and Use of Chemical Weapons and on Their Destruction (CWC). The purpose of OSIs is to detect evidence of non-compliance, add to the deterrent effect of the verification system as a whole and enhance confidence that the treaty is being implemented effectively.