On April 15 VERTIC and the NPS Global Foundation hosted the third online workshop of a series of four within the Project Building Capacity on Multilateral Verification of Nuclear Disarmament. 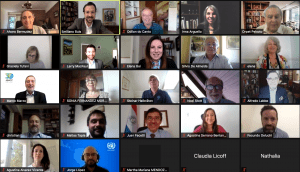 The meeting was attended by diplomats and experts from Argentina, Brazil, Chile, Paraguay, Uruguay and organisations such as ABACC, OPANAL and UNRILEC.