NIM Legal Officer Cédric Apercé attended the Conference of States Parties to the Chemical Weapons Convention (CWC) on 28 and 29 November 2017.
States Parties to the CWC gathered in The Hague, Netherlands, for the annual review of the operation of the Convention. This year marked the 20th anniversary of the entry into force of the CWC, the complete elimination of Russia’s chemical weapons stockpile and the absence of renewal of the mandate of the Joint Investigation Mechanism. Among topics such as implementation, verification and universalization of the Convention, discussions also focused on Syria and the upcoming 2018 Review Conference.

VERTIC’s participation to the CWC Conference of States Parties was also the opportunity to discuss past and future work with various States Parties to the Convention; as well as to attend side events organised by the CWC Coalition to which VERTIC is member.

VERTIC is grateful to Green Cross International and the Government of Canada whose financial supports made Mr Apercé’s participation in the conference possible. 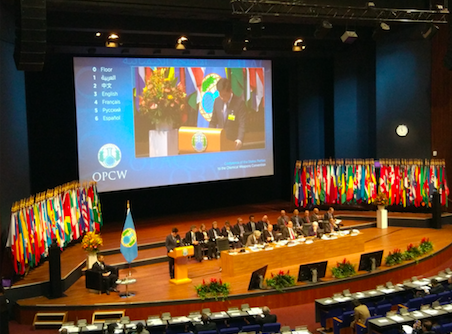